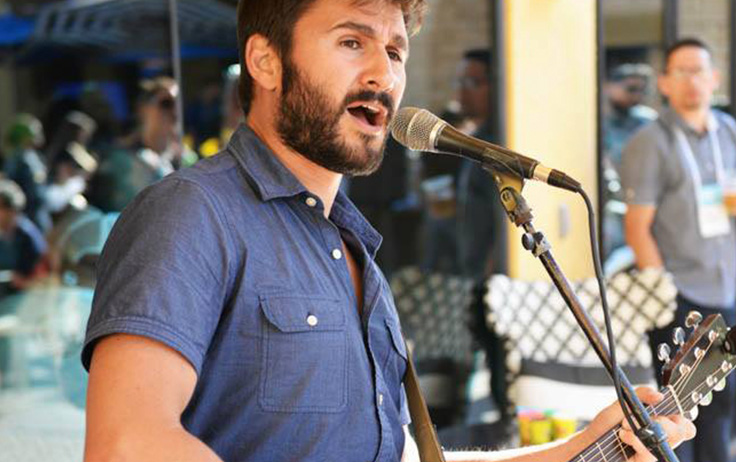 EVO: So Booda, tell us a little about your EVO experience so far? What brought you here? Is it everything you hoped for?

Booda: Well, I first heard about EVO and took a tour in 2014, since then intentional community living has become a huge value in my life, so a few years ago I decided to get serious about it. I was like most of my friends, I had been talking about community, but I hadn’t actually taken the steps to get real, first-hand experience, so EVO was a great opportunity for that. My initial plan was just to stay for a few months, but I ended up really enjoying living here — the people are excellent and I really got into living in the country.

EVO: Ye haw cowboy! So what it is about EVO that makes you feel like you’re living in the country?

Booda: Well, for example, the first thing I do almost every morning is I go feed the chickens and goats. I also chop wood and make a fire every night in my wood burning stove, but most importantly — I’ve been wearing a lot more flannel and leather — adopting the “EVO style”, as mandated by Kyle Shinners.

Booda: “Police” isn’t the right word, he’s more like a girlfriend who wants to have sex with you every time you wear her favorite shirt. So at the end of the day, it feels like your choice, but it’s really not. He also bought me a leather hat when we were in Idyllwild that has been nothing short of life-changing since I started wearing it at music gigs. Everyone loves it.

EVO: It’s a really great hat. Speaking of music, can you talk a little about what you’ve done with the EVO Tea House?

Booda: Sure! Last year I converted the Tea House into a rad music venue. It still functions as a community space, but now it has a stage, lights and a great sound system so we can have legit music shows there, kind of like the one we have coming up!

EVO: You must be talking about the show on April 26th with Adam Knight and Angus Wilson!

Booda: Indeed I am, it’s gonna be so fun — those guys are really talented, and we do the shows “in the round” style, which means we’re all on stage together, but we alternate playing songs and telling jokes.

EVO: You are pretty funny, Booda.

Booda: Aw, thanks! I mean, mostly I just say stupid things then put my foot in my mouth. But people seem to enjoy it.

EVO: Yeah we do. Alright, so besides converting the Tea House into a music venue, you’ve also hosted a huge Roman toga party in the pool house, created EVOlympics and now you have a new tiny house and it’s barely been a year. What’s your secret to being such a prolific resident?

Booda: Well I wouldn’t say “prolific”, I just have fun and do whatever brings me joy. I’m just a regular guy.

EVO: Whatever Marie Kondo, don’t sell yourself short — people have been saying you’re the new “Lauren Kennedy”, and that’s a pretty high compliment.

EVO: Humility isn’t exactly what you’re known for, why this sudden change of demeanor?

Booda: I don’t know what you’re talking about, I feel like you’re assuming quite a lot.

EVO: Come on buddy, you’re “Dave Booda.” All the ladies want you, and the men want to be you. You’re practically a local celebrity.

Booda: This is getting ridiculous, I’m really not even sure how this interview got so off track, I thought we were going to talk about community?

EVO: We already talked about that.

Booda: Okay, so are we done?

EVO: I have a few more questions, and a wish.

Booda: A wish? What do I look like… a genie?

EVO: I was just hoping you could play and sing my favorite song.

Booda: It’s never one song, and you know that.

EVO: But it’s my favorite song.

Booda: You already said that.

Booda: I didn’t even say that — you’re quoting yourself. I can’t believe this is happening.

Booda: Really?!? You’re bringing “fake news” into this? I can’t even.

Booda: No, I’m going to back to my tiny home and locking the door.

EVO: I know where you live.

Booda:I know, we live on the same property.